Sadaki’s journey with Jin Shin Jyutsu began from birth] , as during his childhood, he received regular sessions from his parents. His father was Dr Haruki Kato, one of Master Jiro Murai’s 2 main proteges. The other main protege was Mary Burmeister.

In 1990, Sadaki started studying with his father, and worked with him from 2002-2014. Whenever Jin Shin Jyutsu instructors visited Japan, Sadaki would also assist his father as an interpreter.

Prior to working with his father, Sadaki worked as an acupuncturist and physiotherapist in two hospitals between 1997-2002.

Sadaki joined the teaching faculty of JSJ, Inc in 2014 and has conducted classes in Europe, South America and USA. He currently runs his own clinic in Japan and is a licensed practitioner of acupuncture and moxibustion.

He wants to share Master Murai’s original thoughts and ways of Jin Shin Jyustu and to be a bridge connecting the two worlds of Jin Shin Jyutsu – Mary Burmeister’s and Haruki Kato’s. 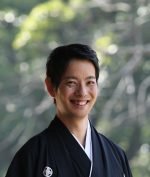